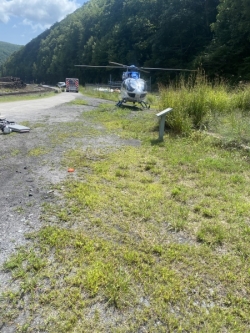 Fire District 19, Mahoning Valley EMS and Lehighton ALS 5620 were dispatched to area of 115 Mile marker on D & L Trail for a rescue possible still on the river in Lehigh Township at 12:23 hours. S...
➜
Provide Rehab to Kidder Township at Dwelling Fire
Fire District 19 was dispatched to Holiday Pocono in Kidder Township for our rehab unit. 1941 and 1975 went responding with a crew of 4 firefighters to provide rehab for the fire. Assisting Units t a...
➜
Life Flight Landing Zone Decker Lane

Fire District 19 was requested to setup a Landing Zone on Decker Lane by 665 for an EMS call requiring a flight. 1911 went responding with in 6 minutes of dispatch. 1911 arrived on scene and setup a ...
➜
Standby at station
At 2208 hours 2001 requested.his first alarm structure box to be put on standby at there stations as per fire district 20 was dispatched for a smoke investigation in area of the old high school on spr...
➜
News
L & L Fire Announce 2016 Officers

On Saturday September 5th Seven member of the L & L Fire Company held its bi annual Boot Drive. It was held at the intersections of Buck Mountain Road and Lehigh Gorge Drive. We held the event from 8am to 4pm and all CDC guidelines were followed by wearing masks and gloves at all times.
➜
Birthday Parade celebrations in Packer Township and Weatherly Borough
Around 6 PM on Wednesday Evening Fire District 19, Fire District 20 along with Weatherly Police and Mahoning Valley Ambulance went through the community on a bunch of different street and drive by parades for approximately 8 different kids who were celebrating birthdays.
➜
Easter Bunny Visits 2 Townships

Easter Bunny Visits Lehigh & Lausanne Townships
All You Can Eat Breakfast
On Sunday April 15 we hosted our second Breakfast from 8AM until 1PM. We served about 115 people at this breakfast this month. We did somethings a little differently this month from last month but all in all we had a great turnout from the community at making this a success.
➜
Vehicle Rescue Class hosted by L & L Fire Company
On Thursday April 12, Saturday April 14 and Sunday April 15 there was a Vehicle Rescue Operations Class which was held at District 19 Station Sponsored by the Carbon County Fireman's Association and was Instructed by Bob Ward & Hondo.
➜
Elvis Makes His 2nd Appearance to Firehouse
On Saturday April 7th there was an Elvis Dinner/Show at the firehouse. At approximately 6PM there was a Dinner Buffet served to about 26 people who came to see the show. There was a lot of homemade cooked foods which were served as the meal to the audience.
➜
Legal Concepts for Fire Police
On Saturday and Sunday April 7 & April 8 four of our members attended a Legal Concepts for fire Police Class at Lehighton Fire Department District 5 in Carbon County. There was a lot of useful information learned at this class that many people would not even realize existed.
➜
Bingo returns
On Sunday March 25 we had a crowd of approximately 33 people who showed up to try there hand at Bingo to win Cash prizes. There was door prizes, lottery tree raffled off along with delicious homemade foods which were sold.
➜
First All you can Eat Breakfast which is the 3rd Sunday of the Month.
As of the January Meeting the membership agreed to test there skills at serving a breakfast for the Greater Weatherly area since the 3rd Sunday in the weatherly area had none. So Members spent approximately 5 hours on the Saturday before the breakfast preparing the potatoes for homefries, bacon, sau...
➜
Soup & Potato Cake Sale
On Friday March 16 the fire company sold approximately 800 potato cakes and approximately 170 quarts of a combination of Ham & Bean, Potato Soup and Vegetable Noodle Soups it was a combination of a few volunteers who gave up there day to make this event possible.
➜
L & L Fire Company Elects 2018 Officers
At the regular business meeting the fire company elected its 2018 business and line officers. Business Officers President Mary Cookie Macey, Vice President Keith Koch, Treasurer Teresa Barna, Assistant Treasurer Becky Gregory, Secretary Mary Jo Minich, Assistant Secretary Michelle Clark and Historia...
➜
L & L Takes Delivery of the New Rescue Truck
On Tuesday May 16 3 of our members being the chief, engineer and assistant engineer left the area and flew down to Mississippi to go inspect the new truck out. After the final inspection was complete the three man crew began making the 1,000 mile trek back home to the small town of Weatherly, The t...
➜
Soup & Potatocake Sale
On Friday March 24 from 11 AM until 5PM the members of the fire company cooked and sold approximately 550 potato Cakes and 88 Quart of Creamy Potato Soup and Vegetable Alphabet Soup
Firehouse Opens as Shelter for Blizzard of 2017
With the impending snowstorm about to hit the area. Blizzard warnings were issued along with state of emergencies for the Commonwealth. So Monday evening March 13, 2017 at around 7pm our firefighters opened up our fire station as a warming station / evacuation shelter.
➜
L & L helps cover for Penn Forest Twp Vol Fire Co #2
On Saturday February 4 Engine 1911 & Rescue 1955 with a crew of 9 firefighter headed to District 12 station 2 to cover calls for them while they attended a funeral in Monroe county for there deputy chiefs son who was killed in a fatal sking accident at Camelback Ski Resort Last Weekend.
➜
Fire Commissioner announces award amounts for 2016-2017 OFSC Grant
On Friday February 3 the fire commissioner awarded the amount of money that the Lehigh & Lausanne Rural Volunteer Fire Company received $13,387.96 from the grant which will be used for debt reduction on the 1988 international rescue truck
➜
L & L Fire Company Elects 2017 Officers
Business Officers President Mary Macey, Vice President Keith Koch, Secretary Mary Jo Minich, Assistant Secretary Dana Maines, Treasurer Teresa Barna, Assistant Treasurer Becky Gregory Historian Martha Raynock .
➜
L & L Fire Company Receives AFG Grant
On Friday September 9, 2016 we got conformation from FEMA that we were rewarded the Assistance to Firefighting Grant (AFG) to acquire a New Rescue Truck to replace the 1988 Rescue Truck we purchased. The fire company is in the process of getting numerous specs from different fire truck manufactures ...
➜
L & L Rural Volunteer Fire Company Takes Delivery of Rescue 1955
The L & L Fire Company recently purchased a used Rescue Truck from Command Fire Apparatus which is located in southern PA. The truck is a 1988 International rescue truck with an aluminum body with tons of compartment space.
➜
L & L Fire Announce 2016 Officers
2016 Business Officers President Mary Macey, Vice President Keith Koch, Secretary Dana Maines, Assistant Secretary Michelle Clark, Treasurer Teresa Barna, Assistant Treasurer Becky Gregory. The 2016 Line Officers are Chief 1901 Tim Rossman, Deputy Chief 1902 Keith Koch, Assistant Chief 1903 Steve Ka...
➜
1 of 22 of 2
39 entries in the News
Carbon Monoxide Detector
Fire Extinguisher use
Learn Sounds of Safety
Yellow CSST Safety 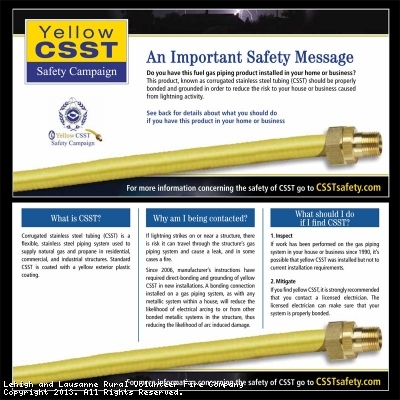 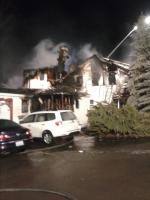 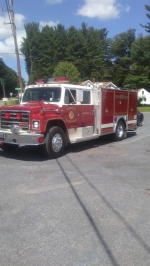 This site has been viewed 78,543 times.
Calls
News
Events
Pictures
Apparatus
Maintained by the members and staff of Lehigh and Lausanne Rural Volunteer Fire Company. Designated trademarks and brands are the property of their respective owners. Copyright © 2006-2022. YourFirstDue Inc. All Rights Reserved. Content on this web site is supplied by Lehigh and Lausanne Rural Volunteer Fire Company. YourFirstDue Inc. cannot be held responsible or liable for any content, text, pictures, or any other media found on this web site.
Management login
Powered by